With an MBA and the Executive Master of Health Administration online degree added to his decades of expertise, Don Larsen heads a growing health care enterprise. 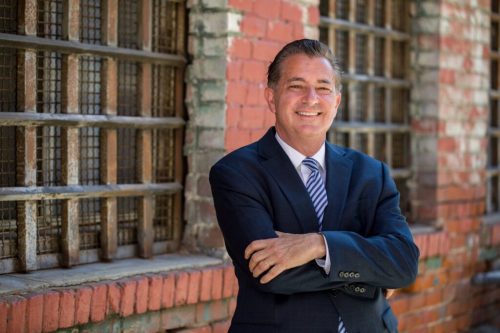 Don Larsen, a graduate of both USC Marshall School of Business and USC Sol Price School of Public Policy, calls himself a “Trojan for life.” Photo: Courtesy of Don Larsen

Don Larsen, MD, had reached the top of his specialty when he decided to take the executive path to optimizing patient care. As a globally renowned interventional neuroradiologist, he used advanced imaging technologies and minimally invasive procedures to treat aneurysms, stroke and other disorders of the central nervous system.

“But these interventional techniques require a lot of hand-eye coordination,” Larsen told USC Online. “It’s very high risk, and I felt that at some point down the road in my career, I wouldn’t be at the top of my game anymore.”

So, he transitioned to administrative leadership as the first-ever chief medical officer (CMO) of Keck Medical Center of USC. After nearly five years of success there, he became the inaugural CMO at USC Verdugo Hills Hospital.

Even with an MBA from the USC Marshall School of Business, Larsen decided to return to the university to expand his organizational expertise. He applied to the Executive Master of Health Administration (EMHA) online program, which is offered by the top-ranked USC Sol Price School of Public Policy.

From CMO to CEO

Larsen credits the USC Price EMHA with giving him the confidence to make the largest leap in his career thus far. In 2019, the University of California Riverside (UCR) appointed him CEO of UCR Health, the rapidly growing health care arm of its medical school. Both the UCR School of Medicine, where he serves as a clinical professor of radiology, and UCR Health were founded just six years before Larsen joined the enterprise.

“It’s a fairly young medical school — and an even younger clinical enterprise,” he noted.

As CEO, Larsen leads UCR Health’s mission of expanding health care access across Southern California’s Inland Empire. The work is crucial, as the region averages only 35 primary care physicians per 100,000 people. UCR Health doesn’t yet have its own hospital, and Larsen oversees the institution’s effort to begin building a primary care network throughout the region as well as eventually several hospitals.

“It’ll take a good number of years,” he added.

Larsen is also committed to increasing training opportunities for medical students and residents. In addition, he has implemented an administrative internship program.

“I don’t think I could have put that together if I hadn’t done the EMHA,” he said.

Larsen knew the EMHA would broaden the knowledge he needed to lead medical institutions through rapid changes in the health care landscape. He already had garnered plenty of professional experience and accomplishments, as well as the MBA, so pursuing the EMHA “wasn’t so much to make me marketable, but because I truly wanted to fill in the gaps in my health care administrative background,” he explained.

The program’s curriculum prepares students to stay ahead of health care system changes in developing and implementing strategies that enhance cost-effectiveness, clinical outcomes and patients’ experiences. Larsen said he found the EMHA’s lessons on advanced payment models for reimbursement and the use of digital technologies to empower patients as partners in their care to be especially valuable.

In addition to practical training that Larsen could put to use immediately, “the EMHA adds a lot of marquee value to a résumé,” he said. “People recognize the program, and it has a lot of credibility.”

While the EMHA is designed to be completed in 24 months, Larsen had to tack on another year due to the intensity of his prior dual appointments: CMO of Providence Saint John’s Health Center and executive director of its John Wayne Cancer Institute.

The program’s flexibility, according to Larsen, easily accommodated his demanding schedule.

Working with quality reports and deadlines, Larsen appreciates how the EMHA reflects what he calls “the real world of administrative medicine.”

“These are all things I live with on a day-to-day basis,” he said of the program’s curriculum.

“There are usually just three or four physicians per class,” Larsen noted, and the degree attracts a wide variety of students. “There’s a lot of value in being with case managers, pharmacists and others to understand their perspectives and what everyone else is doing. We collaborated and learned from each other, which provides a rich experience and grows your network.”

In addition to professors from USC Price, the multidisciplinary faculty draws from parts of the university including the USC School of Pharmacy, USC Marshall, USC Annenberg School for Communication and Journalism, USC Leonard Davis School of Gerontology and Keck School of Medicine of USC. The program also welcomes noted industry professionals as guest lecturers — Larsen now among them.

Trust and the Trojan Network

The EMHA also promotes opportunity for its degree holders by instilling trust in potential employers, according to Larsen.

“I’m pretty sure that my being in the EMHA program gave the Providence Saint John’s CEO the confidence to ask me to run the John Wayne Cancer Institute alongside my other work,” he said. “Having the degree allows people to make assumptions that you have the necessary skillset because of what you’ve learned and accomplished in school.”

Speaking from experience as a CEO and CMO, Larsen added, “I have hired EMHA alumni because I know what they have gone through.” Graduates also become part of the vast and supportive USC Trojan Family. While the alumni network is worldwide, he noted that “there are a lot of EMHA graduates in Southern California, and we stick together.”

Even as Larsen dedicates himself to expanding the scope and success of UCR Health, he admits to remaining a Trojan at heart.

“I’m a double alum, my wife’s a double alum and both my kids are alumni,” he said. “I’m also a USC Associate and I’ve been on the Board of Governors, so I’m a Trojan for life.”