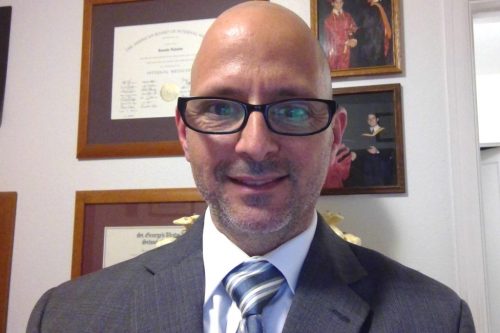 Following his graduation from the online Executive Master of Health Administration program, Joseph Maslak is tacking hospital-wide issues that range from reducing the overuse of antibiotics to increasing the cost effectiveness of prescription choices. (Photo: Courtesy of Joseph Maslak)

After years of tending directly to patients, Joseph Maslak, MD, decided to make an even bigger difference in people’s lives.

“I wanted to drive change based not only on my clinical experience, but also on what I see as the most important issues in patient care,” he told USC Online.

Even though his background included 12 years of medical staff leadership and 23 years of work as an internal medicine hospitalist and primary care physician, Maslak had aspirations to expand his executive skills. So, he turned to USC and applied for the online Executive Master of Health Administration (EMHA) program.

“I felt that the biggest way to not only achieve equity for patient care but also promote value was to have a role like chief medical officer where I would work with medical and other staff leaders to drive change,” said Maslak, who had been leading hundreds of caregivers as chief of staff at UCHealth in Colorado. “The only way to do that was to add to my education.”

Rising to the C-Suite with USC’s EMHA

Armed with his EMHA, Maslak then became chief medical officer at Citrus Memorial Hospital in Florida in October 2021. His duties include heading a staff of nearly 1,200 caregivers, including 150 physicians. With 204 beds, the hospital’s specialties include emergency services and robotic surgery for minimally invasive procedures.

The job, Maslak explained, “is strictly administrative, while all my previous leadership roles were based on a foundation of clinical care. So, this is a new way of looking at things.”

Some of Maslak’s colleagues expressed surprise at his decision to switch gears in his career. One doctor asked why he went to “the dark side” of administrative leadership.

“My response was, well, if the dark side is elevating the level of care to make it safer and better, then I guess I’ve joined the dark side,” Maslak recalled with a chuckle. “But, frankly, my CMO position gives me a platform to help all of my health care co-workers in improving our hospital.”

With the knowledge instilled by the USC Sol Price School of Public Policy EMHA, Maslak felt ready to take on such challenges by promoting core principles while keeping up with state-of-the art advances. He sees many opportunities for improvement in health care — and intends to seize them all.

Today, Maslak is working on hospital-wide issues that range from reducing the overuse of antibiotics to increasing the cost effectiveness of prescription choices.

“These are all really exciting projects in which we’re trying to move the needle in achieving better patient outcomes and value in care … We must ask ourselves, ‘Why did we get into medicine in the first place?” he said. “Was it just to make money — or was it to really help people at possibly the most vulnerable point in their lives?”

While Maslak firmly believes that most health care providers enter the field with noble aims, he expressed concern that the profession’s pressures sometimes lead to “losing sight of our true mission.”

Maslak quickly found that the EMHA provided the ideal training to bolster his already impressive background of medical leadership. The program blends online learning with an in-person residency experience to provide students with the knowledge to shepherd health care institutions through transformational times. Its curriculum builds skills in value-based and cost-effective care, effective administrative and financial management, enhancing patient outcomes and safety, and maximizing the advantages of health information technology.

Maslak appreciated the wide range of health care leaders in the program who added different perspectives to his knowledge.

“They challenged me to think differently about how to break down silos and build up equity in health care,” he said.

The program also forced him out of his comfort zone. “Finance was a big weakness for me,” he admitted, which made the course “Health Care Economics, Financing and Reimbursement” invaluable.

The coursework, however, went far beyond accounting, giving Maslak a wider perspective on initiatives such as the Affordable Care Act and the future potential of health care. Cost and quality of care are a major emphasis of the EMHA, Maslak added, “because outcomes in the U.S. aren’t great compared with other developed countries, but the cost of care is enormous.”

Maslak also found the EMHA’s combination of classroom knowledge with real-world experience and examples to be incredibly helpful. “USC, the Price School itself, and the caliber of professors all made it a really great experience,” he said.

Lifelong Connections With the Trojan Network

Having the EMHA on his CV definitely proved to be in his favor as he applied for different positions, Maslak noted. Being part of the famed Trojan Family of supportive USC alumni was a huge plus, as were the connections he made with fellow students.

“I’ve been able to maintain relationships with a number of the folks in my group, and it’s good to see their career changes and what they’re doing with their professional and personal lives,” Maslak added.

While most of the EMHA is conducted online, the program involves two weeklong residencies where classmates gather at USC. The COVID-19 pandemic, however, forced Maslak’s second residency into the virtual realm.

“We had all-day leadership meetings, team-building exercises and dined together,” Maslak said of the pre-pandemic, in-person residency. “We also explored the campus and the Keck School of Medicine. It was a heartfelt experience to meet other people doing the same thing that you are — but who bring different perspectives and strengths.”

Maslak’s classmates included an anesthesiologist, a dentist, a physicist and a radiology director, providing cultural as well as professional diversity.

“One of my best connections was originally from Germany,” Maslak said. “He brought a lot to the table in comparing what medicine is like there to what it’s like in the United States.”

Although the online EMHA is geared toward the schedule of busy professionals, Maslak admitted he did find it a bit challenging to balance courses with his medical practice and chief of staff duties. Then there were family obligations, as he has a daughter who was just 8 when he began pursuing the degree.

Fortunately, his wife understood — especially as she was earning her own EMHA at USC. While she began the program a semester later than he did, they had a few overlapping classes.

“She’d be in one room with her computer, and I’d be in another room,” Maslak recalled.

Since they kept their marriage to themselves during their studies, their classmates were in for a surprise at the on-campus commencement ceremony.

“She’s a hospitalist as well, and now she’s moved on to administrative work as a physician adviser for United Health. So, she’s also had really strong success with her EMHA from USC,” he concluded.